In Bastar, Impunity for Rapists in Uniform, Non-Bailable Warrants for Adivasi Survivors

A year after several Adivasi women accused men from the police and security forces of sexual assault, the investigation has stalled due to governmental inaction.

Women from the Bijapur villages, where the alleged assaults by security forces took place last year, have to walk for several hours before they can get to the closest pucca road located at Sarkeguda, the site of a paramilitary camp. Credit: Chitrangada Choudhury
If the cogs of justice grind slowly in much of India, they move backward inthe war zone of Bastar. Last November, police in Bastar’s Bijapur district registered a FIR against the suraksha bal (security forces) after several hardscrabble Adivasi women and a teenage girl from five remote, forested villages, narrated chilling accounts of being assaulted by armed members of the security forces. The contingent of the accused comprised police and paramilitary troops who came to these villages after being deployed on an anti-Maoist operation in October 2015. The FIR marked the first time a new section of the IPC – introduced to prosecute sexual assault crimes by deployed members of the security forces – was invoked in Chhattisgarh.
A year on, none of the alleged perpetrators – accused of gangraping a teen, a pregnant young woman and her mother-in-law, stripping and molesting several other women in the village and attacking and looting several homes – have been booked. This week, when I asked H.K. Rathore, the Inspector General of Police heading Chhattisgarh’s CID and the department in charge of the case, why the police have made no arrests in the year since the women reported the violence, he said, “The investigation is still on.”
In contrast, weeks ago, Bijapur’s district court issued non-bailable warrants against the women – all subsistence farmers and labourers – for missing court dates to come and record their testimony. The warrants were issued despite the fact that the concerned villages are located 18-25 kilometres away from the nearestpucca road and paramilitary camp, and a further 50 kilometres from the district court. The villages these women belong to consist of multiple hamlets, situated in the forests and scattered across large distances, whose residents have little to no access to telecommunication or public facilities.
Additionally, the villages in question are served by a sarpanch in absentia who lives in another district and thus is hardly around to communicate official information from the court to the women. All the complainants, formally illiterate, are Gondi speakers, whereas the court operates in Hindi. A Bijapur court official said that the warrants issued against the women were part of court procedure, and that apart from the recording of the women’s statements (the only activity undertaken in the past year), “nobody was paying too much attention to the case.” 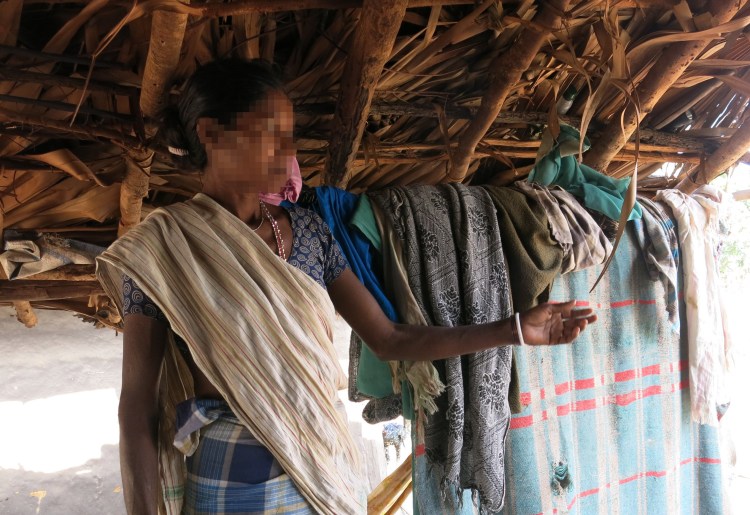 This Bijapur villager and her pregnant daughter-in- law were assaulted with rifles and gangraped by security forces during an anti-Maoist operation last October. When I met her last December, she still bore an injury on her shoulder. Credit: Chitrangada Choudhury
Meanwhile, Chhattisgarh’s police authorities have effortlessly avoided interrogating, arresting or chargesheeting the colleagues who are accused of assaulting the women. Their nonchalance has been aided by the conduct of multiple national statutory agencies, which took “cognisance” of this horrific violence, but have had little impact thus far. For example, last December, the National Human Rights Commission (NHRC) took suo moto cognisance of my reportage from these villages for the Hindustan Times and issued notices to the Chhattisgarh state government and the home ministry, asking for responses “within four weeks.”
Stalled investigation
It has been nearly a year now and each time I have spoken to officials at the NHRC over the course of this year, they have said they are awaiting a response from the Chhattisgarh government. In fact, in March this year, following multiple alarming press reports and a petition by academic Kalyani Menon Sen, the NHRC sent its own investigators to Chhattisgarh. This team was tasked with to probing the reported sexual violence being perpetrated by members of the police and security forces as well as cases of police and security personnel intimidating the press, pro-bono lawyers and human rights defenders working in Bastar. Requesting anonymity, an NHRC investigator said that the team – which remains the only statutory agency to travel as far as the villages and visit the sites of the reported assaults – had found the women’s narratives to be true and believed that members of Chhattisgarh’s police force carried out the assaults.
However, the NHRC is still desisting from making its report public. Sen said, “In view of the deteriorating situation, the NHRC needs to take swift action to hold authorities to account for the use of sexual violence as a weapon of war.” But the NHRC has denied even Sen, the petitioner in the case, a copy of its report on the grounds that the Chhattisgarh government is yet to respond adequately. When the Chhattisgarh government might do so is anyone’s guess.
Similarly, after his repeated letters to the state government on the subject of the alleged sexual violence yielded no response, Rameshwar Oraon,  National Commission of Scheduled Tribes’ Chairperson, led a team to Bastar this April. After meeting with several women survivors, Oraon’s 15-page Hindi report concluded that “there is a breakdown of discipline among the security forces.” Noting that the state’s investigations of the women’s complaints had barely progressed enough to identify the perpetrators, Oraon recommended that the probe be transferred from the district police to the state’s CID. 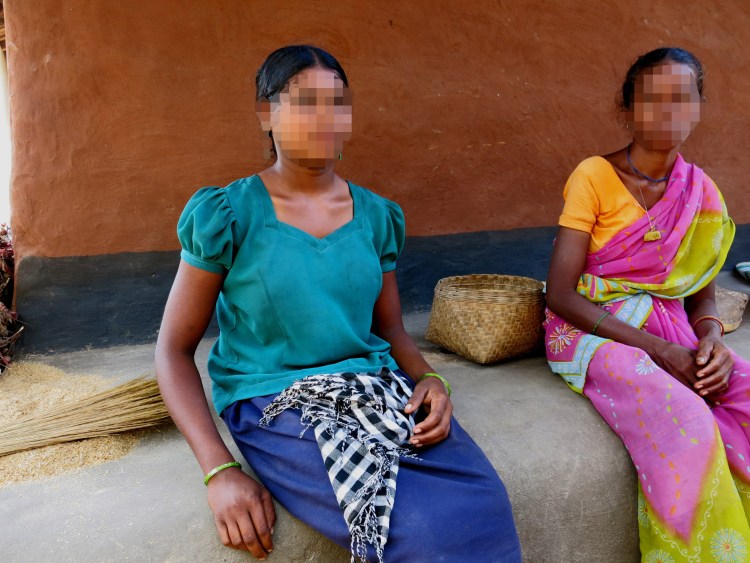 This teen (left) in a Bijapur village said she was gangraped by men from security forces and became unconscious. Her aunt said she and other women from the village were assaulted with sticks and rifles. Credit: Chitrangada Choudhury
Oraon sent the report to the Chhattisgarh government at the end of April and asked for a report on the actions taken by the government. This week, NCST staff said that the Chhattisgarh government is yet to send any response.
Meanwhile, transferring the case from the Bijapur police to the CID, which happened several months ago, has made little difference to the accused, given that “the investigation”, as Rathore said, is still on. More specifically, when I asked Rathore if his team had formally questioned the commanding officer of that fateful operation or individual police and paramilitary men on the deployed contingent, the senior police officer declined to answer and asked me to call back after a few weeks.
The above case is not the only registered instance of members of the security forces perpetrating sexual violence in Bastar. This January, after women from the villages of Nendra in Bijapur and Kunna in the adjoining district of Sukma narrated hair-raising accounts of being gangraped and molested by security force personnel deployed on military operations in their villages, police reluctantly and belatedly lodged FIRs, after facing pressure from civil society and political activists.
That none of these cases has since seen meaningful action against the perpetrators demonstrates the following: Adivasi women living through the war in central India can neither expect any protection from being sexually assaulted by men in uniform, nor hope that such crimes will be punished.
Chitrangada Choudhury is an Orissa-based multimedia journalist and researcher. She can be reached via email on suarukh@gmail.com
Liked the story? We’re a non-profit.Make a donation and help pay for our journalism.
previous post