Disputes over land for industry on the rise in India, angering locals – charities 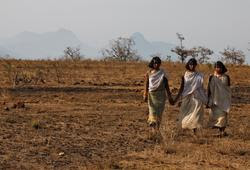 By Nita Bhalla
NEW DELHI (Thomson Reuters Foundation) – Civil unrest in India is expected to worsen after a 30 percent rise in two years in the number of disputes between local communities and authorities taking over land for industrial projects, charities said on Wednesday.
Most of the conflicts over land takeovers by state authorities, often acting for private investors, were recorded in mineral-rich, forested regions such as Odisha, Andhra Pradesh, Jharkhand, Meghalaya and Assam, they said.
Much of the land involved was vital for India’s impoverished tribal communities which make up more than 8 percent of its 1.2 billion population.
Many of them live on the margins of society, inhabiting remote villages and eking out a living from farming, cattle rearing and collecting and selling forest produce.
Disputed land takeovers currently affect one quarter of India’s 664 districts, according to a new map drawn by the Society for Promotion of Wasteland Development (SPWD) and the Rights and Resources Initiative (RRI).
“This raises serious doubts about whether the current model of land takeover – where bureaucrats make decisions behind closed doors to displace or impoverish millions of people – is sustainable in the long run,” Kundan Kumar, RRI’s Asia director, said in a statement.
“Given India’s complex land and forest tenure history, transparent and accountable decision making as well as respect for people’s rights are vital missing elements.”
The map, based on media reports and court cases, showed there were 252 conflicts over land takeovers in 165 districts at present, compared with 177 disputes in 130 districts in 2012.
The charities said many disputes had arisen after state authorities had taken over land, often on behalf of private investors. Takeovers included acquisition of private land, diversion of forest land, and the transfer of common lands.
Since Prime Minister Narendra Modi swept to power in May on a pro-business platform, environmental and human rights groups have been concerned that his policies would disadvantage the poor and damage the environment.
The Bharatiya Janata Party-led coalition government is considering weakening a landmark law which recognises the rights of tribes over forest land, in order to clear the way for infrastructure projects such as roads and railway lines.
The map’s researchers forecast considerable civil unrest in response to major projects planned over the next 15 years, which will require over 11 million hectares of land and will probably affect the livelihoods of tens of millions of people.
“Investors and financial institutions, as well as the government authorities transferring community lands to investors, must start taking the risk of land- and tenure- related conflicts seriously,” said RRI’s Kumar.
“Upholding communities’ basic rights to their lands and resources is the only path to achieving true prosperity for India, and truly risk-free investments.”
(Reporting by Nita Bhalla; Editing by Tim Pearce)

© Thomson Reuters 2014. All rights reserved.
Thomson Reuters journalists are subject to an Editorial Handbook which requires fair presentation and disclosure of relevant interests.

When Thousands Marched In The Heart Of Delhi To Warn Modi Govt. Of Its Anti-Poor Moves!

Tue Dec 9 , 2014
Share on Facebook Tweet it Share on Google Pin it Share it Email When Thousands Marched In The Heart Of Delhi To Warn Modi Govt. Of Its Anti-Poor Moves! Akhil Kumar December 3, 2014 By Akhil Kumar: The Modi government came into power riding on the popular slogan of ‘Ab Ki Baar, […]